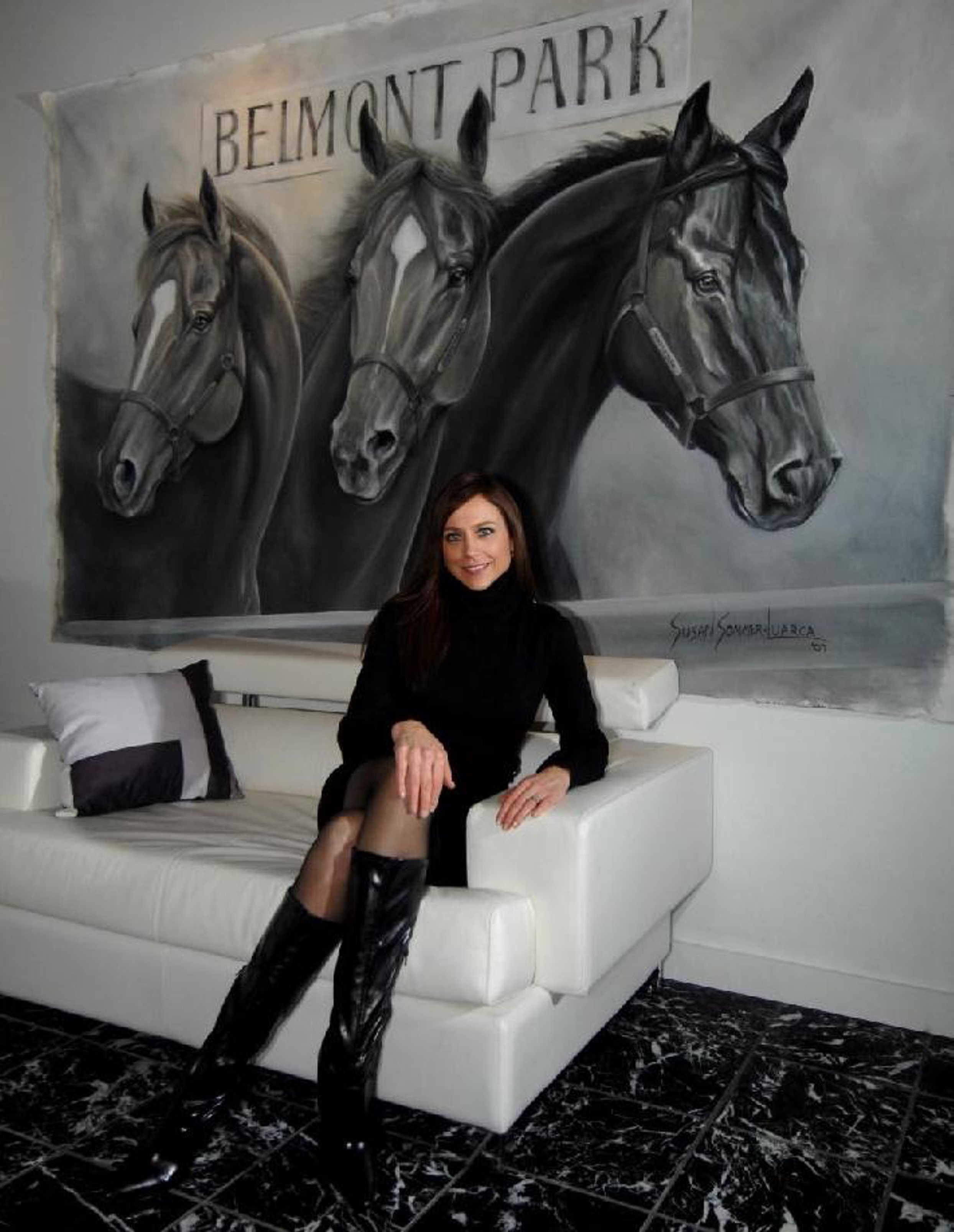 Susan Sommer-Luarca is one of the world’s most renown equine artists, but she also excels in varied subject matter in any number of different mediums and styles. She has been recognized throughout the art world for her abstracts to realism, fine art paintings, and sculptures.

She grew up on a ranch in southwest Missouri. A self-taught artist, she was drawing and painting the many horses on the farm with great attention to detail at a very young age. Susan has now been painting fine works of art for more than thirty years, capturing humankind, wildlife, all things equine, and the world around us.

Early in Susan’s career, she was an artist for Bass Pro Shops headquarters in Springfield, MO. She then traveled extensively for Bass Pro, creating giant works of art across the country during their corporate nationwide expansion.

Susan was chosen to be the Official Olympic Artist for the 2008 Olympics in Beijing, the 2010 Olympics in Vancouver, and for the United States Equestrian Team during the 2016 RIO Olympics.

Susan has been commissioned to create sculptures of renowned subjects such as Seattle Slew and his jockey Jean Cruget, and just recently completed a commissioned life-sized bronze of a national champion Arabian horse. Susan’s sculptures capture human and animal life from table-top sized pieces to life-sized and larger than life.

Susan was invited to paint at Super Bowl XLII in 2008 by the NFL. She completed two paintings LIVE of the competing quarterbacks Eli Manning and Tom Brady, and those paintings were unveiled on FOX “Super Bowl Sunday” to millions of television viewers worldwide. In 2003, Susan was commissioned to create Official Paintings for the P.G.A. Nationwide Tour. She was the first woman chosen for this distinguished honor. Susan was honored again when she was chosen in 2004. Both paintings were inducted into the Sports Hall of Fame in Susan’s Home state of Missouri.

Susan was afforded the honor to paint in the presences of Queen Elizabeth II.   NASA invited Susan to paint LIVE to commemorate the last space shuttle launch of Discovery, at Cape Canaveral, She is the only artist in history to have this honor.  Susan also joins the late Thomas Kincaid as the only two artists in history to be invited to paint the famed Rockefeller Center Christmas Tree LIVE in New York City.

Susan received the prestigious Ellis Island Medal of Honor in New York City. She joins past Ellis Island Medal of Honor recipients which includes six Presidents of the United States, Nobel Prize winners and others whose work has made a lasting impact on humanity.  Susan’s work has been seen and aired by many of the national media outlets including NBC, ABC, CBS, FOX, ESPN, New York Times, LA Times, LIFE and People Magazine just to name a few. Susan and Sheryl Crow performed LIVE together on stage during a special performance in 2013. Susan’s unique ability to perform her art LIVE for high profile events is much sought after.

In 2006, Susan started her own wildlife conservation and preservation foundation, “Susan Sommer-Luarca for Habitat”. Susan is committed to her vision of garnering awareness to the preservation of wildlife and its natural habitat.  In support of this mission, some of Susan’s paintings of wildlife are regularly sized to huge multi-story indoor and outdoor murals.

Susan served as a board member, national spokesperson, and helps raise funds for the Alzheimer’s Association. Susan began the first “Memories in the Making” painting therapy for Alzheimer’s patients in southwest Missouri. Her mother was stricken with early-onset Alzheimer’s. Thanks to the program, this therapy is now benefiting many patients yearning to express themselves. Susan is the Official artist of the Cattle Baron’s Ball, and in addition, provides painting therapy for children suffering with the disease by creating an original art piece with them and their families each year. Her tremendous efforts benefit the largest fund raising event for the American Cancer Society. Susan has lost several family members and friends to cancer, including her parents, so this cause is also very near to her heart.